BE PART OF THE GENERATION...

"WHAT WOULD VINCENT THINK?" 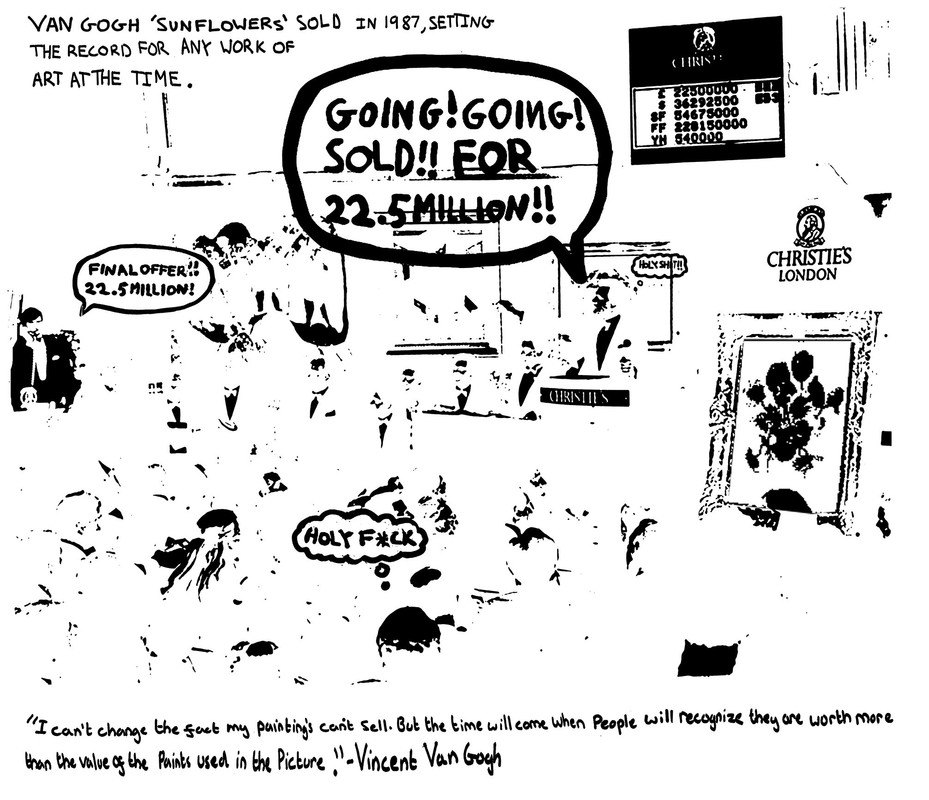 "What would Vincent think?":

Our new collection “What would Vincent think?” is based around the Dutch artist Vincent Van Gogh. It asks the question  “What would Vincent think?”  as a comment and speculation to his “Sunflower” painting being sold at auction at a  record-breaking price of £22.5 million in 1987.  With the most basic interpretation being what would he think not only of his painting fetching such a price but also what he would think of the ONE GENERATION sunflower design.

But the  question aims to look deeper  into the  underlying feeling of appreciation and self-worth  within a world in which he, along with so many others, felt  rejected.

Throughout Van Gogh’s life feeling of  rejection and loneliness, self-worth and purpose were a constant theme.  Due to his devotion to a life as an  artist,  in the  eyes of his parents,  he was a  social failure.  As a  victim of unrequited love, unfulfilling affairs  and even  relentless rejection from the   art-world  he was  drawn into dispair.  Financial uncertainty  and emotional pain  led him into a  depression  which resulted in  nervous attacks,   and episodes of   self-harm  including the now famed  cutting off of his ear  and later  hospitalisation.   On the  27th July 1890,  his   angst  and  concern for his future overwhelmed him;  and as he stood alone in a wheat field he  turned the trigger upon himself.

Almost 100 years later in  1987 Vincent Van Gogh’s “Sunflowers” reached record price at Christie’s London, the first piece ever to sell over 10 million.  As the most speculated art sale of its time, it became the most memorable sale of its generation.

It is sad to think that in Vincent’s lifetime he would only ever sell one painting.

On the front of our design, the sale of Van Gogh's 'Sunflowers' is depicted along with the quote:

"I can't change the fact that my paintings don't sell. But the time will come when people will recognise that they are worth more than the value of the paints used in the picture.” - Vincent Van Gogh

Vincent is now considered as one of the greatest, and most influential artists in the world.  If only he could know how much he is now revered let alone appreciated.

It is for this reason that I ask myself:  “What would Vincent think?”

What can we learn from this?

One of the  underlying   yet one of the  most important motifs  of the  “What would Vincent think?”  collection is  mental health.  The collection  aims to rid our society of the taboo of mental health,  we need to  make terms  with the  fact  that in the  UK suicide is the biggest killer of men under 45.

The collection is a  comment upon the idea and necessity of being  worth something.  Not only in the financial sense; but more importantly in the realisation of  self-worth.  This  tragic story should remind us to support and encourage each other, not just when it comes to mental health  but also in the   everyday.   We need to make one  feel accepted and worth something;  both  within themselves and society.

Vincent writes that his  “Sunflowers” are a  symbol of “gratitude”, painted during a ‘rare period of excited optimism’.

Over time the sunflower  has  become a symbol of love, loyalty  and  longevity.  It has been described as the  “happy flower”; the perfect gift to bring joy and warmth to someone’s day.

Van Gogh’s “Sunflowers” have become one of his most recognisable pieces of work, attracting visitors and fans from all over the world.